How I got my solo show

Our local township has a program called Art in Public Places. Each year, they host a juried art show at our local township hall. They have some nice cash prizes and the winners of the major awards are offered the chance to hold a month long solo show sometime during the following 11 months. A bit over a year ago, I decided to enter and see if they considered quilts to be art! I was thrilled to have two of my three pieces juried into the show and even more thrilled to be the winner of one of the major awards. So that is how I got my first solo show.

I was excited to be juried in and have my pieces hang next to watercolors, acrylics, oils, sculptures etc. I have won awards in local and regional quilt shows but this was different for me. Granted, this is small time compared to the big shows but it was fun nonetheless. Selling some of my work this way was a bonus. Here is the piece that got me my first solo show: 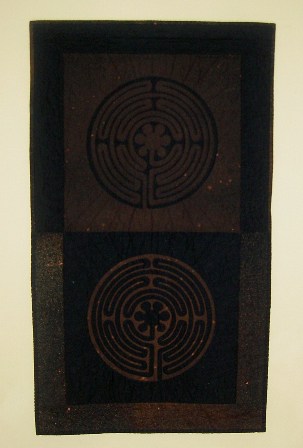 I drafted the labyrinths and created stencils. Then the design was done using bleach discharge. I bleached additional yardage for the borders and binding.

The second year I entered, I again won an award so I got to have a second solo show. It ended last week. Here is the quilt that won the award in that show. I call it “Une Semaine” which is French for one week. 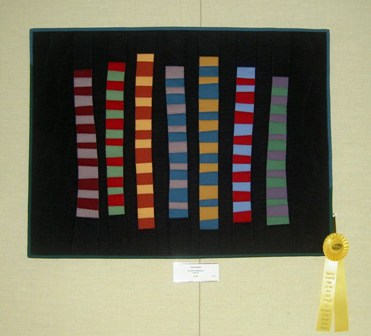 Off to watch my favorite movie (Second Hand Lions) with my youngest daughter!

I am a wife, mom of four amazing adult kids, and a former librarian. I love making everything from traditional quilts to art quilts. I am thankful to God my Father and Creator for the gift of creativity!
View all posts by katyquilts →
This entry was posted in Labyrinth, Solo Show. Bookmark the permalink.

4 Responses to How I got my solo show